Responding to the call “to deepen our response to the unrecognized and un-reconciled racism past and present within our community,” the Sisters of Mercy began sponsoring Anti-Racism Analysis Workshops in 2010. Since that time, over 500 Sisters, Associates and co-workers have received anti-racism training through these four-day workshops. Extending the reach of the Community’s anti-racism efforts to sponsored ministries and local communities is one of the goals of this effort. 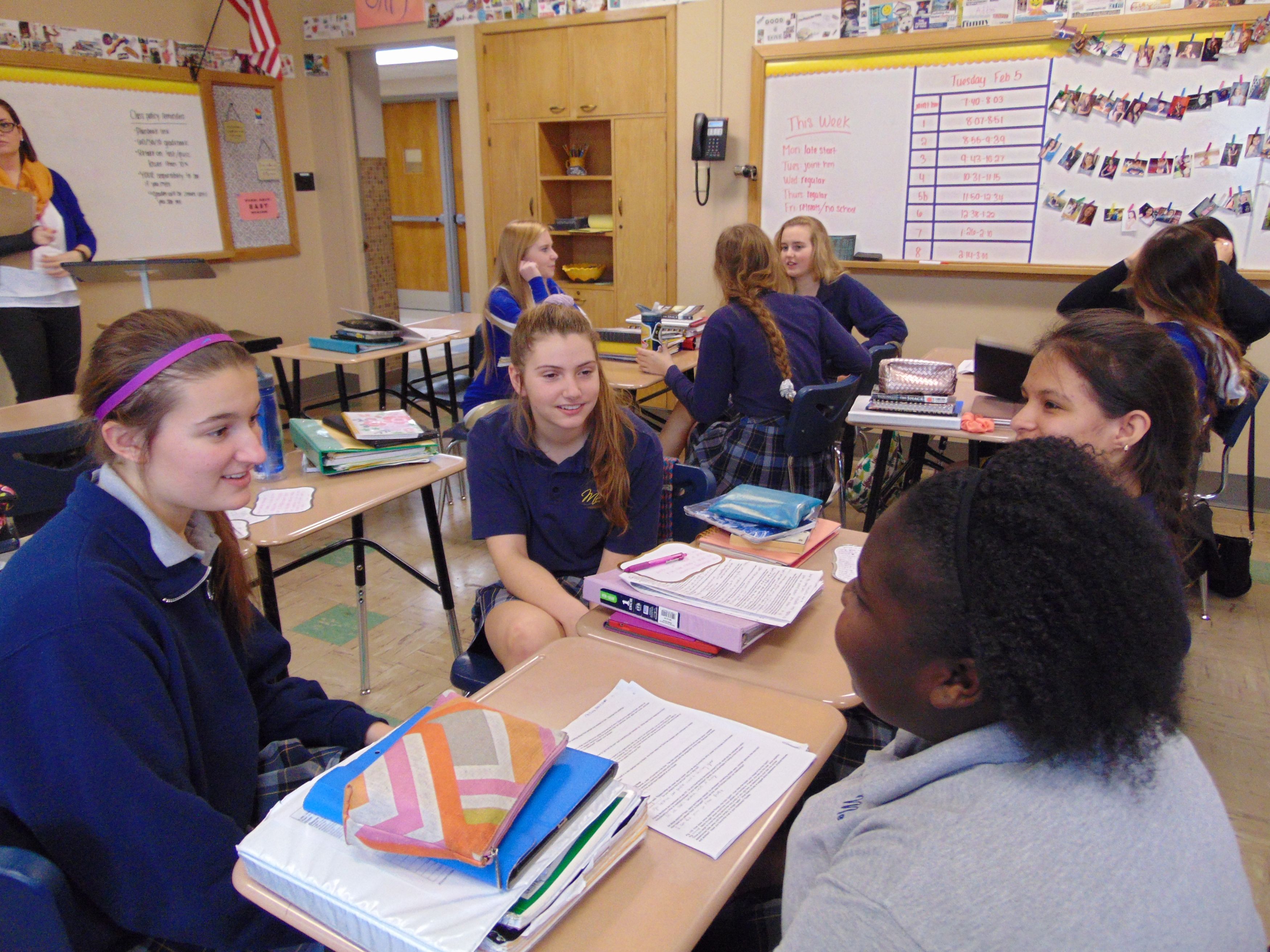 Mercy High School in Omaha, Nebraska, was the first, and currently the only, Mercy school to implement a two-year-old program from St. Mary’s Press called Understanding Racism. Ms. Melissa Regele, a theology instructor at Mercy, chose this program to help her senior theology classes, which focus on Catholic Social Teaching, to grow in the understanding of racism.

The goals of the program include:
•    To learn what “race” is and isn’t, and to learn that racism is perpetuated by prejudices that are learned and can be unlearned.
•    To be able to recognize how prejudice and unconscious bias generate racism.
•    To develop empathy for populations targeted by racism.
•    To empower students to live out the Gospel in today’s world. Students are engaged by interactive learning involving exploration and decision-making. When students encounter real-life scenarios throughout this course, they are “rehearsing for life.” They practice responding to difficult situations in the course so they are more prepared to value human diversity, defend universal human dignity, and act in solidarity in everyday life. (Melissa Johnson)

Melissa Johnson, one of the writers of the course, says, “This course enables students to follow in Jesus’ footsteps by becoming aware of oppressive social patterns and by following Jesus’ example of being in solidarity with people who are disadvantaged by these patterns.”

After attending the Mercy Secondary Education Conference in 2017, Regele decided to expand the discussion on Racism in her Catholic Social Teaching class. After working through the course on her own, she knew she wanted to try it with her class.

Initially, she was concerned that there would not be enough discussion to fill class time, so she had plenty of additional activities planned. She quickly learned that her students would easily fill the period with discussion. Students worked through the online modules on their own, which included readings, interactive activities such as polls and quizzes, and free response questions. During class, they would go through the provided reflection questions.

Juena Laa, a student in the class, was initially concerned about the subject matter.  She completed the classwork that was intended to last ten days, in three. “At first I was concerned, but I got very comfortable while taking it, she said.”

Regele was pleased to find out that students were taking these discussions outside of the classroom as well. They brought the topic up in their other classes, the lunchroom, their friend groups, etc. Class member Mayela Hernandez said, “With my closer group of friends we talk about racism and immigration a lot more after taking this class. We are all more educated. It’s something we all need to talk about.”

Students also had conversations about racism with their parents. Kate Tietjen brought it up over family dinner. She said, “I did mention the course to my family. My grade school did not have diversity, and my family thought this would shape me into a more accepting person. Most people saw this as a great opportunity, but some people didn’t think it was as big of an issue in our society. Through this course, I realized racism is a bigger issue.”

According to student Megan Oswald, being more educated on the subject helps educate other people as well. “I felt more confident to stand up to other people if they were acting in a racist way or letting their implicit bias lead them,” she said.

When discussing if discussing racism in a more in-depth way was helpful, senior Uyen Nguyen said, “I feel like every school should do this because every school is preparing the youth that are going to be the future leaders of the world. If they don’t get this education, then we are going to repeat the same mistakes over and over again.”

The Mercy Education System of the Americas, which includes 56 schools in six countries and one territory, has also put together a series of guide on anti-racism, as well as the other critical concerns of the Sisters of Mercy. These guides include questions, recommended topics and links to additional resources.

Just as the Mercy High students learned that conversations about racism must extend beyond the classroom, the Institute Anti-Racism Transformation Team (IARTT) has always seen the Analysis Workshops as a first step. Continued education and action steps are critical to being anti-racist. The IARTT is in the process of rolling out a series of educational modules so that graduates of the analysis workshop can continue their journeys on this topic.