Ann Nussrallah Adkins’ 74 has been an educator for more than 40 years.  She currently teaches fifth grade at St. Pius X/St. Leo School in Omaha and credits the sense of community and the knowledge you can impact someone’s life, to valuable lessons she learned while at Mercy. 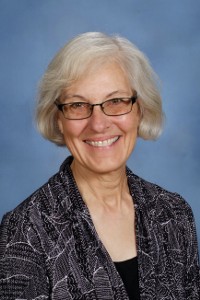 “No matter where I have taught or worked, it always came back to that sense of community and how I, individually or as part of a group, could make a true difference in others’ lives. I also believe that my time at Mercy filled me with possibilities and that has given me the self-confidence and courage to make changes during my career and take on new challenges,” she said.

Ann attended Mercy from 1970 to 1974.  The Mercy alumna went to Holy Cross School across the street and remembers going to a May Crowning with her cousin. For her, the Mercy girls seemed grown up and were always having a good time.

“I asked myself who wouldn’t be part of that?” she said.

During high school she recalls being more a “behind-the-scenes” student who cheered on teams and worked backstage on productions. Her pivotal moment was when she took a catechesis class as a religious elective. That led to valuable insights and a teaching assignment in religious education at St. Joan of Arc.

“Being part of that Mercy class made me feel that I could go out and change the world.  It truly inspired me to want to somehow make an impact.  No matter what teaching position I have held, I have worked to affirm, uplift and empower my students,” she said.

After graduation, she received a Regent’s Scholarship at the University of Nebraska Omaha (UNO), and her family felt it was an opportunity she couldn’t pass up.  Ann was concerned about the large student population, but she discovered that you could create community in individual classes.  The Mercy graduate earned a Bachelor of Science in Education in 1978.

Ann taught at Sts. Peter and Paul School for eight years and spent the next 20 years at St. Bernard’s School.  During that time she taught mostly younger students and that led to a desire to learn more about educating young students.  She decided to go back to UNO to earn her Master of Arts in Education with a concentration on early childhood, receiving her degree in 1999. Having a master’s allowed her to become an adjunct teacher on a college level.  She liked it and decided to study for a doctorate at the University of Nebraska at Lincoln which she received in 2013.  She taught at Dana College in Blair.  She was also a member of the faculty for eight years and earned her tenure at Clarke University in Dubuque, Iowa.

With a strong pull to get back in the classroom and a desire to move back to Omaha where her husband was working, she joined St. Pius X/St. Leo School last August.

During her career she has been honored with two teaching awards.  Ann was named one of the Archdiocesan Inner-City Teachers of the Year in 2004.  In 2016, she received the Meneve Dunham Excellence in Teaching Award at Clarke.  She has presented internationally and traveled to India in 2019 to help prepare and teach English lessons to children living in a rural area.

The mother of four has seen all three of her daughters graduate from Mercy including Lara '99, Jenna '02 and Kimberly '06

“I believe the Mercy experience made them the strong, caring women they are today,” she said.

Although returning to the classroom has been a challenge, Ann feels blessed to
contribute to the wonderful learning community and make an impact through her work in the classroom.

“Whenever I am able, I tout the excellent education that Mercy offers and express my gratitude for that education for me and my daughters. I express our family's appreciation for negotiated tuition – a social justice issue.  What stays with me after all these years is a strong sense of and understanding of community. I think that everything I have done since my time at Mercy has revolved around being part of communities with strong commitments to service and social justice,” she said.