There is a famous quote about nurses that describes alumna Ann M. Franco Laughlin ’ 72:  "The character of the nurse is as important as the knowledge she possesses." —Carolyn Jarvis.

Ann, a Professor at Creighton University’s College of Nursing, learned the value of using her skills for the good of others while attending Mercy. 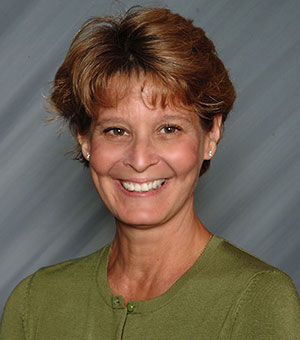 Ann is a legacy student.  Going to Mercy was a family tradition and Ann’s older sisters, Mary Franco Levy ’70 and Chris Franco Zadina ’71 had gone there.   Eventually her two other sisters, Theresa Franco ’74 and Catherine Franco Van Haute ’81, also attended.

Ann’s time at Mercy was spent learning and being involved in debate, theatre and Student Council.  She was very shy in grade school but blossomed in high school.

“I went to debate tournaments twice a month.  I learned to present both sides of an argument and speak much more eloquently. It was a real self-confidence booster, and I also think, being at a single-sex school, there were less distractions and more opportunities to participate in leadership activities,” she said.

During high school, she also worked at a local nursing home and grew passionate about health care for the elderly.

“I saw firsthand older people as not only a vulnerable population but, sometimes in nursing homes, forgotten.  From my years at Mercy, I knew I wanted to use my gifts and talents in compassionate care for people, especially the elderly,” Ann said.

She decided nursing was her calling, and she enrolled at Creighton University after graduating from Mercy.  Ann earned a Bachelor of Science in Nursing in 1976.  She was a staff nurse at several hospitals in Wisconsin as well as in Omaha.  She also became involved in Hospice, geriatric rehabilitation and more.  She went back to Creighton as a part-time teaching assistant while getting her Master of Science in Nursing.  Starting in 1994, Ann became an adjunct professor and moved up the academic ladder in the College of Nursing where she is now a tenured professor.
In 2005, she received her Ph. D. from the University of Nebraska at Lincoln in Gerontology.  She has taught all level of students from undergraduates to graduates and has supervised students in clinic settings from nursing homes to hospitals.  Gerontology and medical surgical nursing are her fields of interest. She has published numerous papers and articles on these topics and has done focused research on health promotion in vulnerable populations.

Ann’s awards and honors are numerous and include membership in Alpha Signa Nu, the Mary Lucretia and Sarah Emily Creighton Award, Heart Ministry Center Volunteer of the Year, Dean’s Award for Faculty Excellence and more. She serves on the Parish Council at Holy Cross Church and as the chair of the Porto Clinic Advisory Board.
Ann also supports Mercy, having served on the Alumnae Council for three years. She also attends FIESTA annually.  Both of her daughters, Rose Laughlin’ 08, an immigration attorney and Mary Laughlin’ 14, a recent graduate of Creighton, attended Mercy.

When asked about Mercy, Ann is quick to point out what she sees as the Mercy difference.

“What I love about Mercy is they walk the walk.  They embrace diversity at all socioeconomic and ethnicity levels. All students are welcomed there, and you don’t see that at all high schools.  It is important that students get exposed to different perspectives because that is what they will encounter in the real world,” she added.