Hold Fast to What Endures 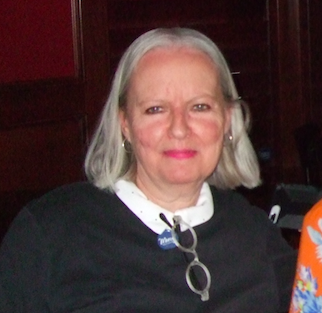 “Hold fast to what endures” is one of Hughleen (Hughie) Thorsen’s ’68 favorite sayings from an Advent Holy Communion prayer. It also applies to how she feels about Mercy High School. She is immensely grateful for the education she received at Mercy. Hughie has many fond memories of her high school years, stays connected with the school by volunteering, and shares insights on the impact Mercy has had on her life.

Hughie chose to attend Mercy High before her parents bought a house near the school. She enrolled in 1964 after graduating from St. John’s Grade School. Although she describes herself as a shy teenager, she was involved in Mercy Martha’s Service organization, the Red Cross, Junior Achievement, Advent Angels, and Big Sister, Little Sisters. On St. Patrick's Day, Hughie sold shamrocks to raise money for Mercy with her two best friends, Kathi Barrett ’68 and Kathie Bushman Standeven ’68. She also volunteered as a timekeeper for the speech and debate competitions held at Mercy and took on small parts in school plays and assemblies.

“To this very day I am friends with many of the women I went to grade school and high school with during those years. Prior to the pandemic, my 1964 Advent Angel, Linda Barry Stoesz ’68 and I became reacquainted over lunch, which was great fun. At the Class of 1968 50th reunion in 2018, I was so happy to see my Big Sister, Patricia O’Neill Sauerman ’65, who was receiving the Distinguished Woman of Mercy Alumna Award. I re-introduced myself to her in the chapel before Mass and gave her copies of pictures at a picnic she organized for my homeroom class in the fall of 1964. She was a great Big Sister, and I have always remembered her kindness to me.”

Hughie also recalls how valuable her school days were. “I remember classes that taught me the various levels of responsibility one has in life, starting with the ‘responsibility to know’ as the first step in becoming a responsible person and citizen.”

Other wonderful memories Hughie has from her time at Mercy include:

After graduation, Hughie attended Creighton University before accepting a job with the City of Omaha. She worked in several departments and was one of the first women hired as a 9-1-1 telephone, police radio, and fire and rescue dispatcher. She eventually became a rotating shift supervisor. “One of the main reasons I was able to succeed at that job was because of a Music Appreciation class I took at Mercy. Sister Maria Therese taught us how to listen to a symphony orchestra and locate different instruments while tuning out the entire orchestra...This skill was essential for a 9-1-1 operator as you often had to listen in rapid succession and sometimes all at once to fellow employees, citizens, police, fire and rescue personnel.”

Hughie worked for the Omaha City Council and eventually as a member of the Mayor’s staff. “The analytical skills and lessons in responsibility that I learned at home and at Mercy I taught to trainees at 9-1-1 and when I trained local and international student interns at the Mayor’s Office. I also stressed that we had the responsibility to help citizens at all times in emergency and non-emergency situations and solve their problems.”

Hughie went back to Creighton to earn a degree in History in 1996. She began graduate school at the University of Nebraska-Omaha in 1997 where she concentrated on United States 20th century military history. She conducted an oral history project recording the memoirs of United States Marines from WWII through the First Gulf War. Hughie also volunteered with the head of the oral history unit at the Marine Corps History and Museum Division in Washington, D.C. as Nebraska’s only contact for the archives. For her work, Hughie was inducted into the Marine Corps League as an honorary member after the completion of the oral history project.

Hughie’s volunteer life is quite full. She is a member of Mercy’s Alumnae Council, has worked to archive documents for the school, assisted with Phonathon and FIESTA, and attends many alumnae events. As a contact for the Class of 1968, Hughie keeps in touch with her classmates via email and organizes social events. She has also volunteered at Mercy Villa, the Sisters of Mercy retirement community, visiting the Sisters and attending their events.

“Being associated with the Sisters of Mercy at St. John’s Grade School, Mercy High School, and Mercy Villa over the course of my life has been a gift of immense value for me. I am so very grateful to have been a part of their storied history, for the education they provided me, and the valuable relationships I have from those times until today. I encourage the generations of Mercy graduates to volunteer or give financially to our school, especially to the Negotiated Tuition Program in support of Mercy's mission to educate young women of Mercy. So fellow alumnae, let us ‘hold fast to what endures,’ Mercy High School, and support her in any way that we can.”