While Rebecca Jacobson ’02 was at Mercy, if any activity involved writing or performing, she was probably part of it. Her professional career has followed those passions and she currently works in science communications for the JILA, a joint physics laboratory with the University of Colorado Boulder and the National Institute of Standards and Technology.

Her journey began in 1998, when she decided to attend Mercy because her sister, Angela Jacobson Weiss ’99 attended the school and it was in the neighborhood. 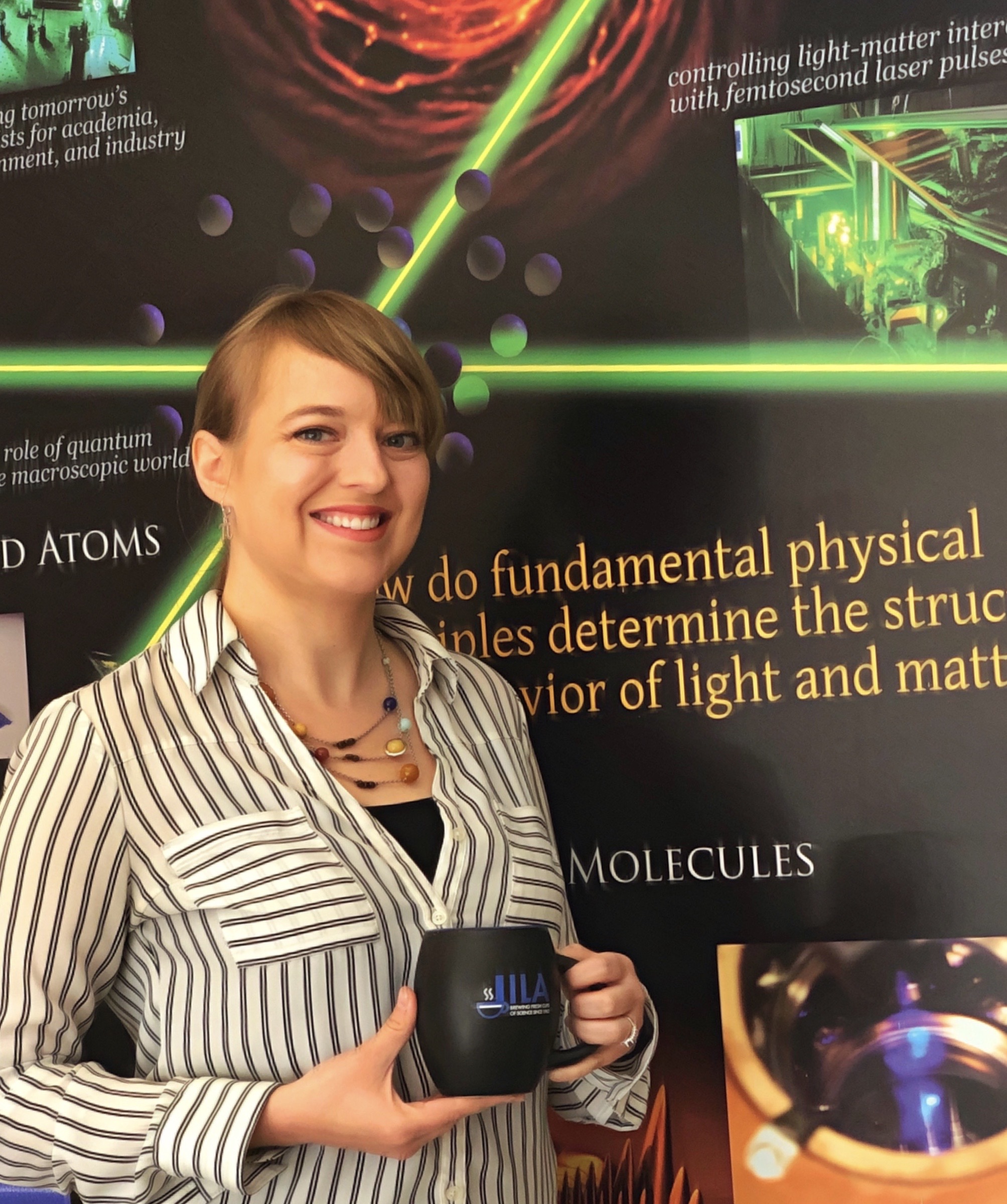 “At Mercy, I was an honors student and a music and theatre participant. I was part of choir, the Mercy High Singers, and was in all of the one-act and fall plays, as well as spring musicals. I also wrote for the school’s literary magazine,” she said.

In addition to writing and performing, the alumna also developed a passion for social justice, activism and civic responsibility from her classes.

“Some of my religion classes senior year were basically introductory moral philosophy classes. My ‘Media and Morality’ class is one of the reasons why I wanted to study film. From writing weekly letters to Amnesty International in English class to current events quizzes, I went into the world able to discuss local and foreign affairs easily,” she said.

After graduation, she decided to attend the University of Nebraska-Lincoln (UNL), earning a Bachelor’s Degree in English Literature and Film Studies.

“Mercy’s emphasis on writing research papers gave me an advantage over other freshman entering college. I was in an honors program at Nebraska, and some of my classmates had never written a paper longer than two pages.  I was already writing 10-15-page papers by my senior year,” she said.

Rebecca started interning at Nebraska Educational Television (NET) her sophomore year in college, working on local documentaries until she graduated.

“Working at NET put me on the journalism path. Mercy had given me a lot of experience performing in front of others, so I felt at ease talking in front of a group and working with a camera or microphone,” she said.

Next, she took an internship with National Public Radio (NPR) in Washington, D.C.  From there, Rebecca joined The Public Broadcasting System (PBS) News Hour as a production assistant and later became a reporter and producer in their Denver office. Her work entailed everything you could do in a TV newsroom: shooting video, taking photos, editing, writing, reporting, setting up lights, arranging catering and travel and developing budgets. She covered politics, health, and the arts but found her niche covering science and technology.

“I refer to my job as being a ‘science cheerleader,’ championing advances of physics for the public. My task is to use every tool at my disposal—videos, photos, articles—to help non-scientists understand why this work is so important. I also help our scientists learn how to talk to the public about their research, whether that’s with journalists or potential funders,” she said.

Rebecca acknowledges that the shift to science communications is a bit of a pivot but reflecting on her high school education and journalism career, it makes sense.

“I had great science teachers at Mercy, all inspiring women who really sparked my curiosity in STEM. They gave me the foundation to understand science and appreciate it even if I didn’t have the skills to be a scientist myself.  In fact, at PBS I started regular Pi Day celebrations because I remembered celebrating Pi Day and Mole Day in my Mercy classes. Mercy always taught us to use our talents to benefit society, and science needs storytellers.”

She doesn’t get back to Omaha often, but she will be Skyping in to share her story with Mercy students on Career Day, March 30.  As part of Kaleidoscope, Mercy’s unique four-year leadership and empowerment program, alumnae will be sharing insights about their careers during that day during that day.