Kathleen Leary ’94 was convinced by Mercy Theater teacher Hersh Rodasky that she could achieve a career working backstage in the theatre; she just had to dedicate herself to that goal.  Kathleen has worked in theatre for more than 25 years and is still going strong.  Kathleen currently serves as the Education Coordinator of the Jerome Robbins Dance Division at the New York City Public Library for the Performing Arts.

Kathleen’s parents gave her the choice of which Catholic high school in Omaha she would attend.  Although few of her St. Pius X Elementary School classmates were attending Mercy, she was impressed by the Mercy’s small size and the welcoming atmosphere she felt when she toured the school and went to the Open House. 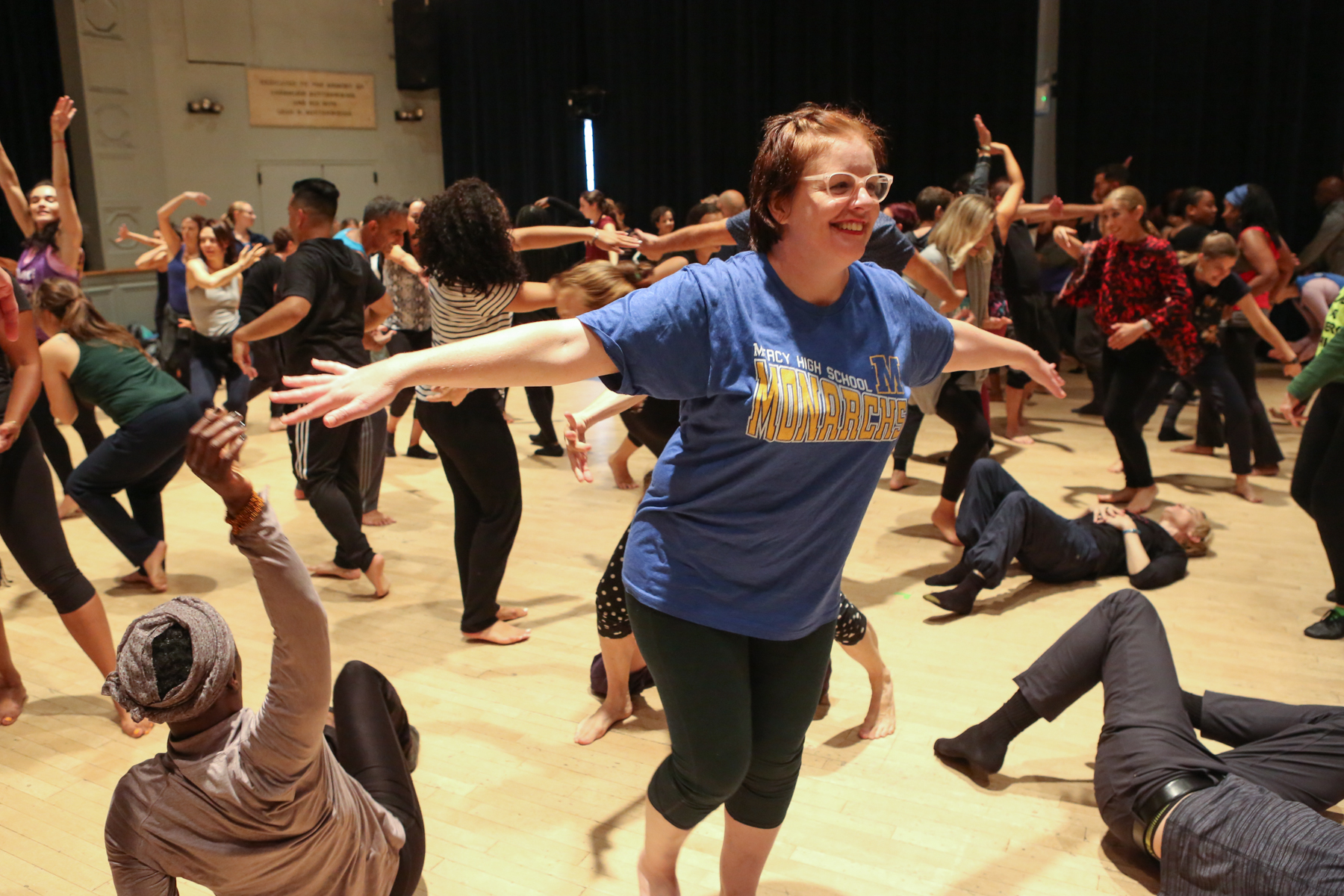 She found a home in the Theater Department, working on costumes, props, and all aspects of the behind-the-scenes work for a production.

“There was a true comradery backstage.  I loved the artistic nature of the work but also fostering the ability to work under pressure.  Mr. Rodasky encouraged my passion and I knew that was what I wanted to do with the rest of my life,” she said.

“I still embrace those beliefs to this day and believe we have an obligation to help those underserved in our communities, providing dignity and support, especially when it comes to learning,” she added.

The Mercy graduate received a scholarship to Coe College in Cedar Rapids, Iowa, and started a double major in Spanish and Theater.  She attended the college for two years, took a year off and then moved to Richmond, Virginia, to study at Virginia Commonwealth University, graduating with a Bachelor’s Degree in Fine Arts in Technical Theater in 1999.  Graduate school was next on her agenda, and she moved again to attend Temple University and receive a Master’s in Costume Design in 2002.

Although she knew it would be challenging, Kathleen moved to New York and began a freelance career in theater.  She worked as a dresser for Playwright’s Horizons and was part of the design team for Ringling Brothers and Barnum & Bailey’s Circus.

“The key was to always be a step ahead.  Even though you might be working on one job, you were always looking for your next position.  That is the nature of the performing arts,” she added.

Kathleen continued her efforts working on the touring company of “White Christmas," a new show that had three touring companies, one of which has performed at the Orpheum Theater.

“I would work as a costume shop manager or shopper during the day, and then design and costume my own shows at night,” she said.

In 2009 she decided to teach costume design at two schools on the East Coast: St. Alban’s School and National Cathedral School.  Both had robust theater curriculums.  Kathleen taught at both schools for five years and decided to get a Master’s in Teaching in Museum Education from George Washington University, earning her degree in 2015.

“I enjoyed imparting my passion and theatrical knowledge to others through the educational process,” she said. 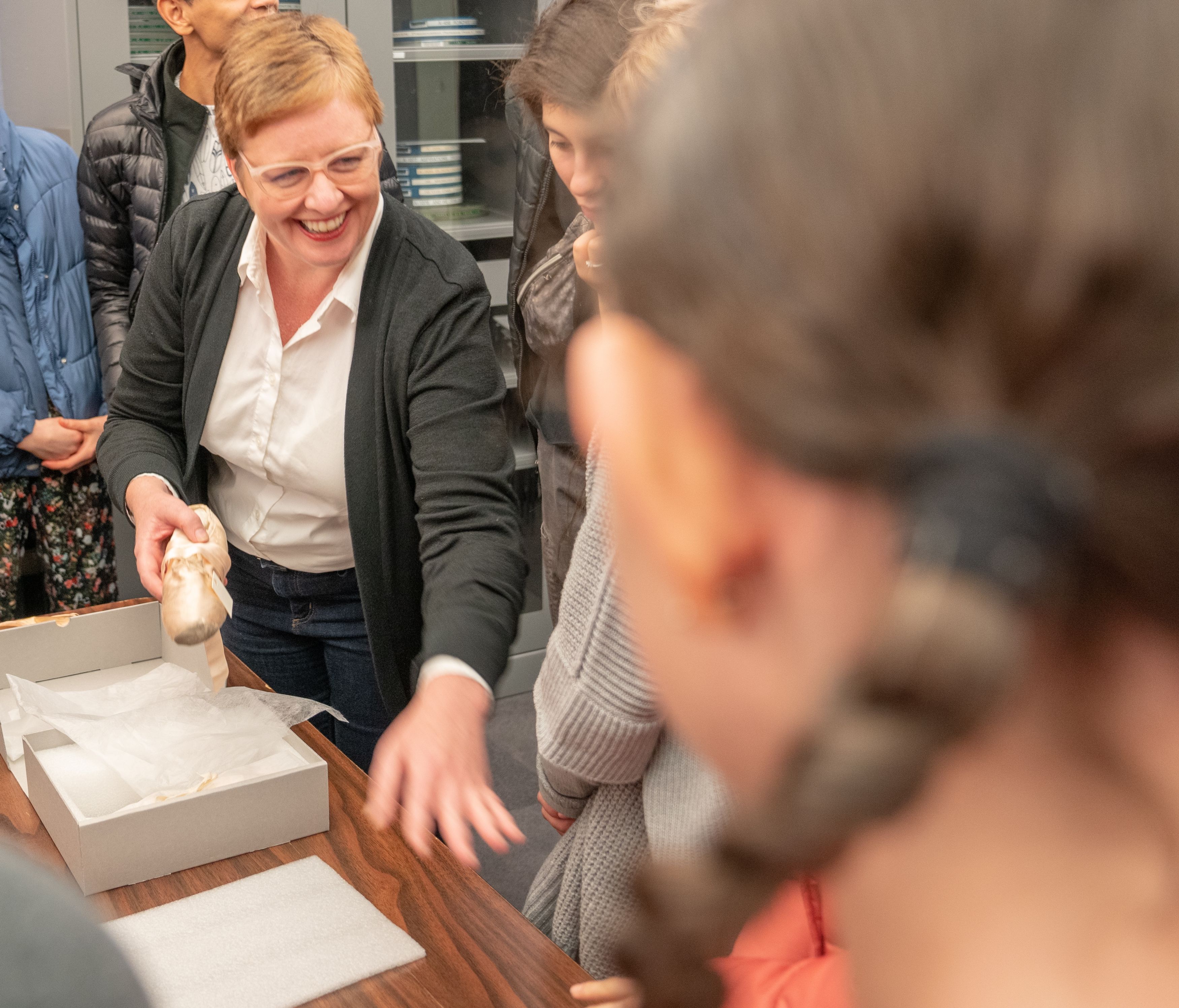 Although she continued to freelance in the museum field for one year after graduation, she found her current job in 2016.  The Jerome Robbins Dance Division of The New York Public Library for the Performing Arts is the largest and most comprehensive archive devoted to the documentation of dance in the world. Chronicling the art of dance in all its forms, the Division acts as much more than a library.  Education and preservation of the history of dance are also important aspects of this work.

Founded in 1944, the Dance Division is used regularly by choreographers, dancers, critics, historians, journalists, publicists, filmmakers, graphic artists, students, and the general public. While the Division contains more than 44,000 books about dance, these account for a small percent of its vast holdings. Other resources available for study free of charge include papers and manuscript collections, moving image and audio recordings, clippings and program files, and original prints and designs.

Through outreach, presentations, and other educational programs, Kathleen works on preserving the history of dance by presenting diverse written, visual, and oral resources to varying audiences, and mostly K-12 students.  She focuses on critical thinking and observation skills through the lens of dance history and movement.

“For example, there is a dance piece called ‘Heartbeat” performed by Mikhail Baryshnikov that I thought would be a perfect video to show 2nd grade students.  Baryshnikov has attached a heart monitor to his chest while dancing and is using that heartbeat as his music.  The teacher and I developed a lesson plan whereby the class learned how to take their pulse, copied Baryshnikov's moves, and monitored the increase in their pulse while dancing.  They also learned the importance of breathing, hydrating, and cooling down after dancing.  I really enjoy creating lesson plans that teach about dance but also about science, history, or language arts, so the material feels relevant," she said.

According to Kathleen, no day is ever the same. She is always meeting new people, sharing new knowledge, and trying new things.

“My dedication to this work has been strongly influenced by my years at Mercy.  I learned you should always do your best to advocate for others,” she added.

“I learned many great things at Mercy. For me, what sets the school apart is the faculty. They believe in you and are dedicated to your success.  Without the influence and passion of teachers such as Mr. Rodasky and Sr. Jeanne O'Rourke, I would never have pursued the career I love,” she said.