Sr. Stevens Named to Board 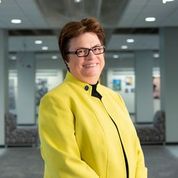 The President of the College of Saint Mary since 1996, Sr. Maryanne began her ministry teaching high school math. Her leadership at the college has resulted in increased enrollment, expanded curriculum and improved fundraising. She also served as director of formation for the Sisters of Mercy from 1977-83 and taught at Creighton University for ten years. At Creighton, she was the first female to head the Theology Department.

Sr. Maryanne serves on several national and local community boards including the Association of Catholic Colleges and Universities, the Greater Omaha Chamber and the Tri-Faith Initiative. Sr. Maryanne has received numerous honors including the Omaha Business Hall of Fame, The Legacy Award for Women on a Mission for Change, and YWCA of the Midlands, Women of Distinction for Education. She has also been recognized with several teaching awards at Creighton as well as the Mary Lucretia and Sarah Emily Creighton Award honoring her support of women.

Sr. Maryanne received degrees in sociology and mathematics from the College Misericordia in Dallas, Pennsylvania, in 1971.  She went on to get a Master’s in Theology from St. Louis University. She earned in Doctorate in Religion and Education from Boston College in 1987.

“We are thrilled that Sr. Maryanne is joining our Board.  She brings a wealth of knowledge about administration, advancement and commitment to the education of women that will truly be an asset to Mercy High School,” said Nicole Hahn Jesse ’80 Board Chair.