She is Mercy’s tea lady, the school’s Spiritual Companion, the coordinator of the Sisters of Mercy Mentoring Program, an educator, an administrator, an athlete, a pastoral minister and a person who brings a smile to all the girls at Mercy.  Sr. Jeanne O’Rourke, RSM, has worn many hats in her life. This is not surprising for someone who “loves meeting and visiting with people of all ages.”

A native of Iowa, Sr. Jeanne was born in Missouri Valley and attended elementary school there and in Neola.  Her high school years were spent at Mount Loretto, a former Mercy High School in Council Bluffs. She was a forward on the school’s basketball team, playing both her junior and senior years.

“My favorite sport is basketball.  I have always enjoyed running and competing as a team.  My nickname was ‘half pint’ because I was short but fast,” Sr. Jeanne said. 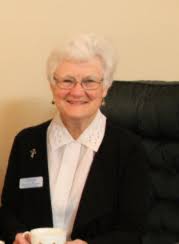 One of her favorite pastimes was running even though the school did not have a formal track and field team.

“I ran road races for 35 years, in 15 states and in hundreds of races. One of my favorite runs was a 10-mile run that included the Golden Gate Bridge. There were times I would come home from races with a medal and the Sisters living with me with would ask if there weren’t any other competitors in my age group. They kept me humble,” she said.

She also honed her leadership abilities by serving as class president during her junior and senior years, and as a senior, she was elected to a position likened to today’s Student Council President.

“Throughout my life, I have been motivated to make things happen. Being in a role of service is important to me. My desire and dream were to find a life’s work that allowed me to serve and be with people,” she said.

Sr. Jeanne graduated from high school in 1954 and entered the Sisters of Mercy at the College of St. Mary.

“I wanted that close relationship with God, and I desired to be involved in serving God and God’s people. At the same time, I also wanted to be married and have a family.  It was not an easy decision. My vow day, August 15, 1957, was a high point of my life. Being with my Sisters in community is the joy of my life.  It is wonderful to share our values, prayers, joys and sorrows, as Catherine McAuley said, ‘all mingled together’ as we make our journey together,” Sr. Jeanne said.

She spent several years in formation, taking theology and basic college courses.  Sr. Jeanne began her teaching ministry in 1959. For 25 years she was an elementary teacher and principal in Iowa, Missouri and Nebraska. She also finished her bachelor’s degree in Education in 1963 from the College of St. Mary and received a Master of Arts in Education/Reading Specialist from the University of Missouri, Kansas City in 1972.

“I loved education but during that time I was also finding fulfillment in pastoral ministry.  During summer months, I served as a hospital chaplain at Mercy Hospital, Council Bluffs, which led me to a year and a half of Clinical Pastoral Education at St. Luke’s Hospital, Kansas City, Mo,” she said.

“This pastoral work was one more opportunity to be engaged and train others to be ministers to the sick and dying.”   she said.

The Sisters of Mercy have also benefited from her administrative and leadership talents. From 1987 to 1992, she was Vocation Director for the Mercy Membership Team in Omaha and from 2008-2011, when she was the Sisters of Mercy West, Midwest Community’s Vocation Minister/Associate Director.

Sr. Jeanne first came to Mercy High School in 1992 when she joined the staff as Campus Minister. She also taught part-time and coached cross country. She held that position for 15 years. 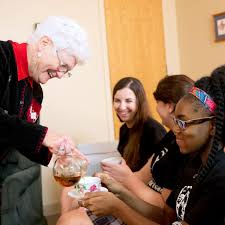 “Some of my fondest memories revolve around the service trips I took with the girls. I wanted them to see the wider world outside of Omaha. One of the most impactful trips was one we took to the Women’s Intercultural Center near El Paso, Texas. We worked at the city dump in Juarez, Mexico, where we cleared the grounds for the children to play. Watching their parents forage for tin and plastic in that same dump as a means of livelihood, had a profound effect on the students,” Sr. Jeanne said.

For a second time, in 2011, she was asked by her Sisters of Mercy Community to be a Vocation Director, but the ‘spirit’ of the girls pulled her back to Mercy High School.

“There is an invitation of joy, a spirit of hospitality, love and community, which is a reciprocated at the school.  The energy flow and lifting spirits make Mercy High School a home away from home!” she said.

Sr. Jeanne’s role is now Spiritual Companion.  Upon her return in 2011, she went to then-principal Carolyn Jaworski and asked if she could have a room where she could share a cookie and tea with the girls. Sr. Jeanne got a tea pot and a few china teacups and Tea Time formally began at Mercy. Now it is a beloved tradition. Her idea came from Catherine McAuley, who on her deathbed told her Sisters “Make sure you have a comfortable cup of tea.”

“Students sign up for Tea Time. The room is filled with stories, laughter, tears and comfort. It is a safe and relaxing place of serenity where girls can hang out and have a respite from times of stress or just feel safe,” she said.

The program has grown.  People in and out of the Mercy family have gifted her with more than 100 beautiful china teacups and 20 plus teapots. The welcoming room is adorned with hundreds of photos of students enjoying Tea Time.

Sr. Jeanne coordinates the Junior Mentoring Program with the Sisters of Mercy; which is intended to promote awareness of the Sisters of Mercy ministries and provide an opportunity for Sisters and students to share their lives, their stories and wisdom. The Juniors and Sisters meet four times a year. They get to know each other, dialogue about current issues, and have conversations centered on the Critical Concerns of the Sisters of Mercy including human trafficking, immigration, care of the earth, racism and more.

Sr. Jeanne has been a Sister of Mercy for 63 years; but she is very young at heart! Her love of people of all ages inspires her, and she in turn inspires our Mercy Girls.