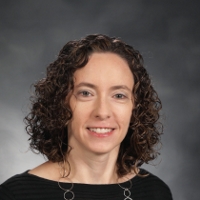 Jane Langenfeld, Mercy High School Art Teacher, has been named the Outstanding Art Educator of the Year by the Nebraska Art Teachers Association (NATA), the highest honor given to active art teachers by the group. NATA is a professional organization whose mission is to develop and promote quality art education in Nebraska through a statewide professional support system, with opportunities for growth and development through leadership and service.

The award is given to an individual who meets exceptional standards of excellence and service in art education on local, state, and national levels and is a member of NATA/NAEA who spends at least .51 FTE in art education. Jane is a full-time teacher at Mercy.

Langenfeld has been in art education for 21 years and a teacher at Mercy for 16.  She has been the Fine Arts Department Chair since 2006.  Langenfeld was recognized as the Secondary Art Teacher of the Year in 2014 by NATA.  She is the co-chair of NATA’S Fall Conference and is the independent and secondary schools liaison.  She received her Bachelor of Arts in Art Education and a Master of Arts in Education from the University of Nebraska at Kearney.

Her award will be presented in conjunction with the organization’s virtual fall conference on October 16 and 17.