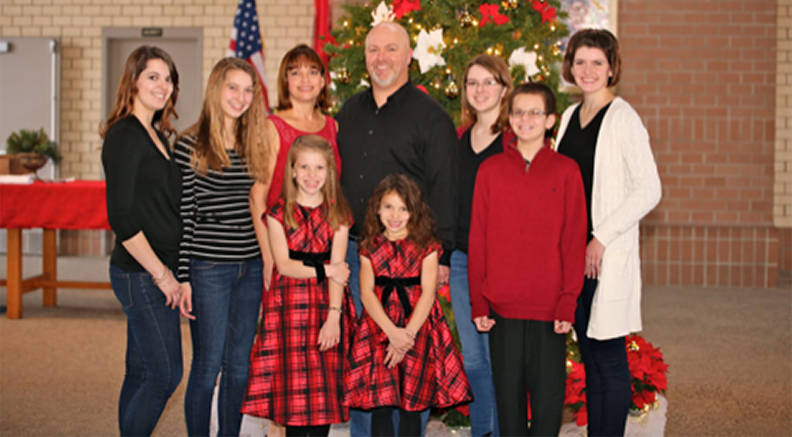 Eric Hoge promises to support Mercy’s Negotiated Tuition Program for the rest of his life because is he extremely grateful to donors for giving his girls an opportunity for a Mercy education. And when you have six girls, the cost of that opportunity can really add up.

Eric, the Engineering Manager at Commonwealth Electric, and his wife Halle, a stay-at-home mom, have seven children. When they moved to Omaha, they were located close to a large suburban high school, figuring once their children were old enough for high school, they would transfer from Catholic schools to public schools. The couple felt they could never afford a Catholic high school education.

However, teachers at St. Stephen the Martyr asked them to consider Mercy High School because they thought it would be a good fit for the couple’s oldest daughter, Madison.

Eric, born and raised in a small town in the deep South, didn’t even want to consider the idea of a Catholic single-sex high school education.

The Hoges decided to visit Mercy with Madison and went to the school’s Open House. They also visited several other Catholic high schools.

“I was determined not to like Mercy, but I was very impressed. The principal at the time, Ms. Jaworski, was very frank. She told us that we were blessed to have so many good options for high schools in Omaha, but she went on to explain that the learning environment at Mercy made it the best. The girls were articulate, friendly, and seemed to radiate positive energy,” Eric said.

Their daughter Madison shadowed at several Catholic high schools in the area, but she fell in love with Mercy after visiting. She was their first child to go to Mercy.

When the couple talks about Mercy, the word they like to use is “thrive.”

“Every single one of our daughters have thrived at this school. Mercy provides you the opportunities to be involved with whatever you want from athletics to the arts to clubs and organizations while maintaining academic excellence and a top-notch learning environment,” said Halle.

The family has many personal stories about the care that Mercy displays for its students.

“By the time Madison had decided she wanted to go to Mercy, she had missed the auditions for the Mercy High Singers and was devastated. I contacted the teacher who understood completely and even made special accommodations so Madison could audition,” Halle said.

Each of their daughters has taken different journeys at the school. When Madison was at Mercy, she was the lead actress in several plays including Belle in “Beauty and the Beast” and Fanny Brice in “Funny Girl.” She graduated in 2011 and went on to get a degree in Music and Musical Theatre from the University of Nebraska at Kearney. Now she works at the Omaha Children’s Museum, is an actress under contract with the Rose Theatre, and teaches at the Omaha School of Music and Dance.

Their second oldest daughter, Brittlin, contemplated not going to Mercy but was “encouraged” by her parents when they told her the other option was being home-schooled.

“During her freshman year at Lincoln, Brittlin told me how grateful she was that we sent her to Mercy” Eric said.

The 2014 graduate was involved in the Mercy High Singers, Show Choir, and soccer at Mercy while simultaneously excelling academically. She is working towards a Chemical Engineering degree at the University of Nebraska at Lincoln as a Regents Scholar. She is also studying abroad in London this semester and was lucky enough to spend Mercy Day at Baggot Street House in Dublin.

With their third daughter Lyndee, Mercy again demonstrated its care, concern, and ability to focus on individual student success.

“Incoming freshmen do not typically have the option of taking Honors Algebra 2. Mercy worked with us to give Lyndee access to this class,” Eric added.

The senior is now a National Merit Finalist, Student Council Secretary, Stage Manager for “The Wizard of Oz,” one of three students chosen to portray Catherine McAuley in the Mercy Day play, and has a 4.2 GPA. She loves theater and has dedicated herself to performances for the past four years. She was also a member of soccer and Show Choir previously. She is in the midst of figuring out her college choices but is learning towards obtaining a degree in language development or linguistics.

Lyndee is extremely grateful to donors for the support they have given to her Mercy education.

“By easing the financial situation for my parents, the donors have helped take the weight off my family and given me space to stretch and grow and not be confined by limits. At other schools, for example, if you are a thespian, that’s all you do. At Mercy, you can do those things that you are interested in and that bring out your best self,” said Lyndee.

“I feel immense gratitude to donors who give their money to help others, and I am humbled that they have entrusted their generosity to my education success,” Kiley said.

The gifted athlete played on the Varsity Soccer Team as a freshmen. She is also a member of Operation Others and enjoys World History.

The last two Hoge daughters, Ellah (9) and Genevieve (7) are also slated to go to Mercy when old enough.

“As a mom, I can’t think of a better blessing than to know my daughters will attend a school that will help mold them in to strong, successful women,” Halle said.

The couple is also impressed with the diversity of the school — socioeconomically, culturally, and demographically.

“I remember Brittlin telling me that at Mercy, you are cool for who you are, not for the clothes you wear, the neighborhood you’re from, or the Church you go to,” Halle added.

Faith, education, and a strong work ethic are integral parts of the family values. The parents both have Masters Degrees, Eric coached all his children in soccer, Halle taught mathematics at Metropolitan Community College, both parents are active in Mercy activities like FIESTA, and all the girls fund their own school trips and are expected to pay for their college education.

“My parents lead by example. My family really talks with each other, and honestly, they’re my best friends,” said Lyndee.

“The Hoges take their commitment to Mercy seriously. They are involved in school activities as parents, volunteer and give financially to the school when they can,” said Sr. Delores Hannon, RSM, President.

If any donor underestimates the impact of their financial gift, the Hoges are ready to share their story. They will forever be grateful for your generosity. It has made all the difference to their family.