As three Women of Mercy, they learned empowerment, the importance of team work, and the value of collaboration.  At the same time, they discovered that if you have a great idea, you can make it happen. Shayne Kennedy, playwright, Amy Harmon Lane ’86, Creighton Coordinator of Theatre & Dance and Viv Parr ’16, Creighton drama student, will see the fruits of their efforts appear on stage during the play, “Handled,” from October 31 - November 4 at Creighton University’s Lied Education Center for the Arts. 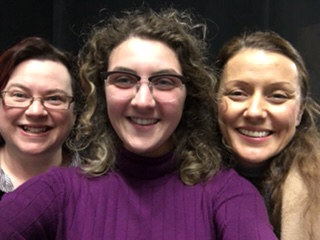 How the three came together on this production is an interesting story of Mercy connections.

Shayne Kennedy is a Mother McAuley of Chicago graduate and Mercy associate. She had an idea for a play dealing with mother-daughter relationships, depression, and the pressure of social media.

“I am a mother and know first-hand the stigma of mental illness and the inclination of a parent to try to take matters in their own hands,” she said.

The play tells the story of a mother who tries to create a social media profile for her daughter after her daughter’s stint at a rehab center. The play includes six strong women characters.

During the development process of the play, Shayne reached out to her Creighton classmate Amy Harmon Lane ’86, also a Mercy graduate, to see if the university could host a workshop on the play.  That took place in 2017 and the production was enhanced to make it ready for public consumption.

“I thought the strong female characters and the relevance of social media and mental health issues made it a perfect option for this year’s fall production.  We were also able to get a grant to have Shayne as an advisor during the run of the play,” said Amy.

Amy’s love of theatre was cultivated at Mercy High School where she was active in drama, music, speech and band.  She also felt that the all-girls community made her a confident person.

“At Mercy, you learned it was about letting everyone be great. It wasn’t competitive; It was about everyone succeeding,” she added.

Her days at Mercy also gave her a unique perspective towards the play.

“At Mercy, we were women working together and talking about current issues.  The women in this play are doing the same thing, dealing with important issues of mental illness and social media, “she said.

The final Mercy connection is Creighton student and 2016 Mercy graduate Viv Parr.  She is student director and Dramaturg for “Handled,” which entails providing research on the many issues surrounding the play. She created a Twitter dictionary of terms to help actors and audience members with common phrases and acronyms that may be unfamiliar. Viv is currently working toward her BFA in theater performance and a Bachelor’s in Music with a minor in Women and Gender Studies.

She is inspired by Amy and Shayne because they approach their art with “sensitivity and wisdom.”

Viv also sees her Mercy years have added perspective in her approach to directing.

“It is always important to approach themes of plays from an honest place. The issues of mental illness and the negative impacts that social media will be very real to most of our audience. Mercy taught me to always have empathy for other people. I try to look at this play through an empathetic lens and remember that the story onstage is a truth for many people,” she said.

Viv was also active in theatre and music at Mercy.  She was the secretary of Student Council and President of Mercy’s Theatre Troupe.

“I graduated from Mercy confident in my ability to be a leader. In college, I now feel prepared to hold a leadership role and do so in an effective and positive way. I use the leadership skills Mercy cultivated in me every time I am given an opportunity to work in groups of people,” she said.

A play brought them all together.  All these women symbolize what being a Woman of Mercy truly means.

Side Note:
The play also received help from another department at Creighton. Brian Kokensparger, professor in Journalism, Media & Computing, had attended a presentation where computer science students were supporting a theatre production.   He went to Amy and they discussed how his Software Engineering students could help with “Handled,” especially since it deals with social media issues.

“It was decided near the end of the summer that my students would be enhancing the world of the play, working to help engage the audience before and after the play.  We hope to add to the audience members' overall experiences of the play itself by providing apps, games and other programs,” he said.