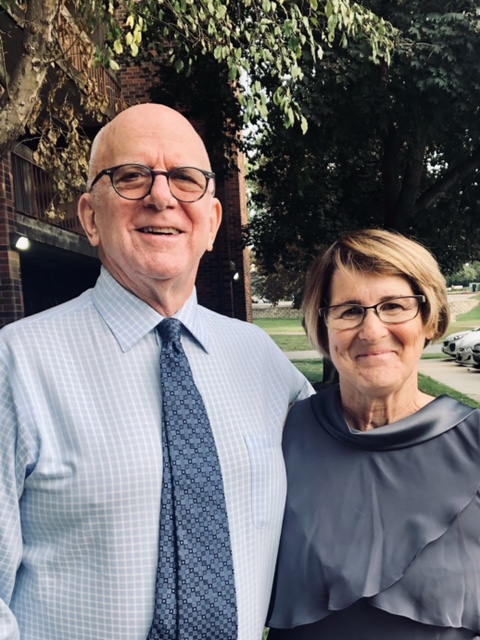 Mercy has been an integral part of David and Mary Levy’s ’70 family for over 70 years. The spirit of Catherine McAuley, the founder of the Sisters of Mercy, has served as a guiding beacon of light for this special family. They have been a part of St. Mary’s High School (St. Mary’s and St. John’s merged in 1955 to form present-day Mercy), Mercy High School on 48th and Woolworth, and the board of the national Mercy Education office located in Silver Springs, Maryland.

In the words of Catherine McAuley, “Our charity is to be cordial. Now cordial signifies something that renews, invigorates, and warms. Such should be the effect of our love for each other.”

Mary and David have led a life of invigoration, renewal, and warmth toward others, which is why they will receive the Cor Misericordiae Award, Mercy’s high honor, during the February 19, 2022, FIESTA celebration.

After graduating from Mercy, Mary attended Creighton for her undergraduate degree and later received her master’s degree in speech pathology from Purdue University.  She met David during this time as he served as a residence hall counselor in the residence hall where she lived.  Mary has always been quick to point out that her mother Louise “met that nice young man behind the desk first” and that “he would be a ‘nice catch’ for her daughter!” The couple wed in 1978 and have one daughter Theresa K. Levy Meehan who graduated from Mercy in 1997, as well as two sons, John and Dave.

Throughout Theresa’s high school experience, Mary and David became heavily involved with Mercy. Sr. Johanna Burnell, then president of the school, told the couple during their initial tuition meeting that “Mercy is a lifelong commitment.”  Little did they know this commitment was for both students AND parents alike!

David served as a Mercy High School board member for seven years and board chair for three years. Mary stayed involved by volunteering for FIESTA, Plant Sale, and Food Sale committees.  She also provided pro-bono speech pathology sessions for Mercy students who would benefit from those services.  It was important to Mary that she assisted the Mercy teachers in addressing the communication needs of those students in the classroom.

Along their daughter’s journey, it became evident to David that service was a fundamental part of the entire Mercy experience. The couple enjoyed watching their daughter participate and organize various service trips in high school and during college. They were also very proud that their two younger sons absorbed the Mercy spirit of service from afar; they have always gone above and beyond when it comes to helping those who are most in need of assistance, both personally and professionally.

“The entire extended Franco family gives their time and energy in different ways, and none of them do it for the recognition,” says David.  “I give my wife most of the credit. And obviously much of it was due to the foundation she developed during her time at Mercy. It’s instilled most of what we saw in all of our children.”

The couple continues to be impressed with the entire Mercy system, both locally and nationally.  They have seen what it can do for an entire family in terms of not only an academic standpoint, but also in terms of service, faith and overall development.

Mary, when not helping as a full-time grandmother, stays involved by constantly giving back.  She uses her extensive social network to identify families in need of assistance with items such as rent, food, and tuition aid at various schools.  She especially enjoys searching year-round for bargain sales of clothing and toys in support of area shelters and pantries, including Heart Ministry Center where their son John once served as director. On account of the many bargains she finds, she is sometimes referred to as a “Shopper extraordinaire” by many who know her well or have benefited from her amazing purchases.  Because of her generosity and connections, several store owners have even donated items for Mary to take to the shelters and pantries.

David was selected to serve on the inaugural Mercy Education Board beginning in 2017. He is now in his fifth year (second term) and credits his time with his Mercy family and previous board experience with providing a solid foundation to mold and shape policy that will affect the entire Mercy Education system.  A Waco, Texas transplant, and an alumnus of Purdue University’s graduate School of Engineering where he earned his Ph.D., David retired from Union Pacific in 2001 and immediately transitioned to Bellevue University where he directs the MBA program and is a professor of supply chain management and decision sciences.

“We are beyond humbled by this honor and cannot thank the Sisters of Mercy enough for making such a positive impact on the lives of our family,” says Mary.  “God bless those Mercy nuns!”

To write a congratulatory note to the Levy’s, click HERE.